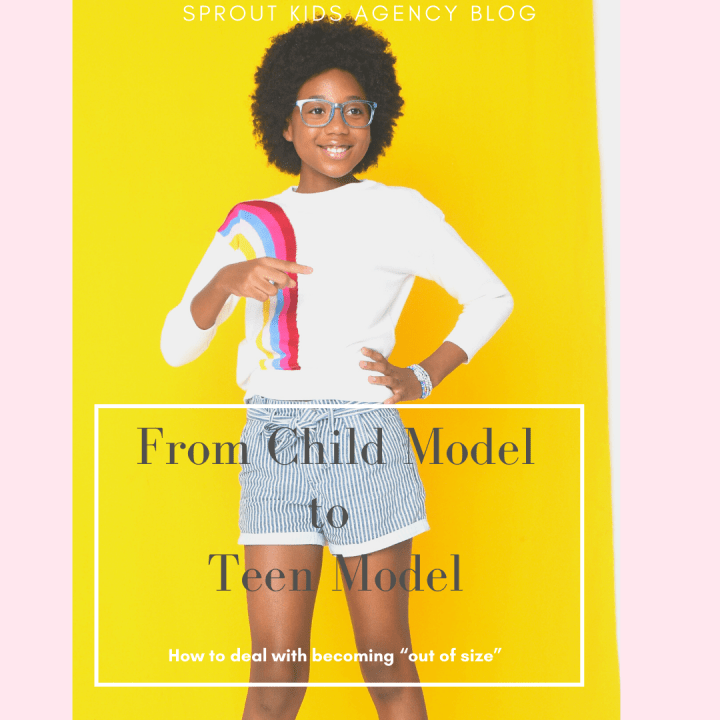 Growing up in the child modeling industry isn’t always easy . You can go from being consistently busy to crickets within a year. Why is this? And what can you do about it? Well, to be honest, once your child hits about the 14, their child modeling career is practically over. There will be a few little jobs here and there, but as a whole it will never be what it once was.During this time, I notice kids agency hopping in hopes that it’s just the agency and not the child’s career slowing down. Parents don’t seem to understand how their child can go from booking job after job to nothing in a years time . Unfortunately, switching agencies is not the answer as you will find the same outcome with any agency you switch to. The teen modeling world is practically non existent.

So why are teens so slow ? We’ll , let’s think about this. When you take your teen shopping for clothes, I would probably be right in saying they shop at adult stores and buy adult size smalls or larger. They are no longer shopping at kids’ stores such as Carter’s or Justice. They are shopping in the adult sections of clothing stores. There are most likely only one to two teen/ young adult stores out there such as Abercrombie or Forever 21. The majority of stores are either branded as kids’ stores or adult stores. So when the clients are coming to your town to shoot their campaign, they are either shooting for their adult line or their kids’ line. For the one or two brands that target teens only,it’s not enough to keep your child as busy as they are accustomed to. I Without there being teen branded stores to cast your child, the teens have no way of staying busy in the industry.

So now what? Your kid loves the industry and wants to continue. What do you do? Most of my teens that were strictly models want to continue in one way or another in the industry. This is when I begin to discuss the acting path with them. Some kids are not comfortable acting and that’s ok.

However, this might be the tail end of their modeling career until they are 17/18 and can begin to transition into the adult modeling industry. Unfortunately, the adult industry is a lot more selective in the talent they represent. An adult model must typically must be 5 foot 8 or taller for women and around 5 foot 11 or taller for men. You must fit the aesthetic of the agency as well. For some of you open to the idea of acting, this can be a great alternative until you can transition into the adult modeling industry. Start taking acting classes with some great coaches ( you can ask your agency about who they prefer ) start practicing self taping and monologues at home, and transition your modeling portfolio into an acting portfolio. Anything you can do to improve your craft will be beneficial.

Unfortunately, some good things must come to an end and not every child model will model as an adult,but that doesn’t mean it’s an end to the industry. There are other paths that can be taken that your child might like even more than modeling. Don’t look at it as an end, but rather as the beginning of something new for your child. Acting is a great outlet that most kids love.If your child might be interested in acting make sure they are with an agent that has a strong acting division. I would strongly suggest transitioning out of a print agency that might have a handful of acting opportunities and into a talent agency. Not every great print agency has a great talent division. Ask around!

If acting is not your child’s strong suit keep them with the agency they are with for the small handful of jobs that might occur, but I would suggest looking into a second hobby. Modeling for teens will not keep them busy enough to cure teen boredom. So if you can manage it into your life, I would suggest finding out what else your child might love to do and add that in as an alternative.

The child modeling industry can be short lived. It’s rare for kids in the industry to make it as adult models, but it’s certainly a possibility. Don’t give up hope as it can be just a few years until your child can hopefully transition into an adult agency. Until then, be patient and understand it’s a small window of being slow and there are other options in the meantime. Who knows, your child might actually find something they love even more during this time. The world is filled with possibilities.

One thought on “Teens in the modeling industry”